He taught, very briefly, as a pupil teacher in the same school. He started his private studies in a Secretariat and Commercial Institute in Victoria, now called Limbe, in the South West Region, Cameroon. He spent two and a half years in this institution. After this, he started writing overseas external examinations which were based in London, England. He succeeded in the following academic programmes:

He then embarked on providing education for others. Based on this, he became the Proprietor of three High Schools, a Higher Professional Institution, and a school of Sports.

He was the founder and President General of the following Football Clubs:

He also attended other courses, as follows:

1971-1972: Red Cross Advanced Instructors Course in Health and Disaster Preparedness and Administration, in the University of Legon, Accra, Ghana.

1975: Red Cross Instructors Course, in Yaounde, Cameroon, organized by the French Red Cross. He was appointed Provincial Coordinator of the Red Cross in charge of training and administration in the North West Region, Cameroon.

He had other responsibilities, as follows:

He was decorated by the state of Cameroon, for his services to humanity, as follows:

Mr. Francis Yong was married. He had 10 children, and grand children.

In July 2013, Mr. Francis Yong left for the USA for a medical checkup and treatment. That was his last journey alive. Below is the picture of his statue, in memory of him.

1979 – 1986: He did his Primary School education in Presbyterian School, Ntamulung, Bamenda, where he earned the First School Leaving Certificate (FSLC).

1986 ̶̶ 1991: He attended Sacred Heart College Mankon. This was a Secondary School. He graduated successfully and earned the General Certificate of Education, Ordinary Level (GCE O/L).

1991 ̶ 1993: The GCE O/L qualified him for the High School. Consequently, he got admitted in the Cameroon College of Arts, Science and Technology (CCAST) Bambili. Here he succeeded and earned the GCE Advanced Level (GCE A/L) which qualified him for admission into a University.

1994 ̶ 1997: He first did his university studies in the University of Buea where he graduated with a Bachelor of Arts (BA) degree. He specialized in History/Political Science.

Dr Akob is a Cameroonian and holder of a PhD, MSc. and BSc. degrees in Agriculture with Certifications in Management, Leadership and Strategy, among others. He studied in some of the best institutions in Africa (University of Ibadan, Nigeria and University of Sierra Leone) and Cameroon (Regional College of Agriculture Bambili, and Cameroon Protestant College (CPC) Bali). He is a registered Agricultural Scientist, with the South African Council for Natural Scientific Professions. He has published a book on “Farming Systems and Practices in Cameroon”, six research papers in Scientific Journals and served as reviewer of a number of peer reviewed Journals. He is well travelled, with a wide scope of international and local work experience.

He served as lecturer at the Regional College of Agriculture, Bambili Cameroon for over 15 years, during which he lectured Food Crop and Vegetable Production, Crop Protection and Farming Systems. Held various posts of responsibility including: Director of the institution, and Dean of Studies & Refresher Courses. He served as a pioneer lecturer, at the National Polytechnic Bambui from its inception in 1996 to 2001 when heleft for his PhD studies. He was part of the team that worked for the affiliation of NPB with OSISATECH Enugu-Nigeria, and in organizing the 1st Convocation ceremony of the institution thereof in July 1999.

After obtaining his PhD, he relocated with his family to South Africa, and was granted an exceptional skills work permit that enabled him to serve in a number of organizations asDirector of Programmes Heifer International South Africa, KwaZulu-Natal Provincial Programme Manager for Heifer International, SA, and Manager of Integrated and Sustainable Livelihoods Programmes for The Valley Trust (TVT). During this period, he supervised and mentored several Agricultural Graduates, on Internship Programmes and Partnership with the University of KwaZulu-Natal, and the South Africa Department of Agriculture. Furthermore, he served as External Examiner for Food Security students at the African Centre for Food Security, School of Agricultural Science and Agribusiness, University of KwaZulu-Natal. He had short working/learning exchange experiences in the USA and several African countries including Kenya, Rwanda, Zimbabwe, Swaziland, Mozambique, as well as Sierra Leone and Nigeria where he had his tertiary education.

Dr Christopher Akobreturned home from South Africa and was engaged as Lecturer and Academic Officer atBamenda University of Science and Technology (BUST) in 2016. He served as consultant to leadthe preparation and putting together all what it took for the successful Ministerial Commission Inspection and Authorization/Approval of the Higher Institute of Technology and Management (HITAM) Bamenda in 2017.Dr Christopher Akob was recently appointed Vice Chancellor of National Polytechnic University Institute (NPUI) Bamenda, Cameroon and took over Office on 2nd July 2018.

Dr Akob is a dependable, people-centred, strategic thinker who relates and works amicably with people from diverse backgrounds. Apart from professional service, he has been involved in Community leadership as member of School Governing Body (Board member) of Hillcrest High School in South Africa, Elder of his churches both in Cameroon and South Africa. Currently he is the pioneer Chairperson of his local Church (PC Ngomgham IV, Bamenda), the National President of his village development association (Oshie Cultural and Development Association – OCA), the Project Committee Secretary, Ngomgham II Quarter, Bamenda, and Chairman of Solidarity Club 97, among others.

ADUH Francis NGALA was appointed Registrar of National
Polytechnic University Institute (NPUI) Bamenda, Cameroon in replacement of Mr. John Suh Che on July 26, 2019. Before his appointment as Registrar, he was the Director of Academic Affairs of the same institution. He holds a Bachelor’s Degree (LLB) in Law and Political
Science, a Maitrise (Postgraduate Diploma) in Law, and a Master of Laws Degree (LLM) in
Public International Law. He is currently carrying out research on different aspects of Public law, Human Rights, and Public Administration ADUH Francis NGALA is lecturer of law and Human Rights. He has held several administrative and teaching positions in different higher institutions of learning in Cameroon. He held the post of Acting Registrar of NPUI in 2007. He was Dean of the School of Law of NPUI from 2008 to 2013. He currently lectures at The Bamenda University (UBa) on part-time basis. He is presently the North West Regional Chief of Centre for the Higher National Diploma (HND) Examination, and in that capacity, he represents the Cameroon Minister of Higher Education at the level of the North West Region. He has authored the follow legal texts;

He is a motivational speaker, and Human Rights Activist. He has wildly travelled across the
globe. He has participated in a multitude of international seminars, workshops and colloquia
where he presented papers, and in some cases played the role of facilitator. He has offered guest-
lectures in some foreign Universities. 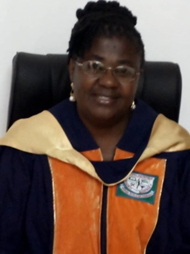 Resume: Assistant Director of Academic Affairs since November 2017. I am a holder of 1) MSc. Animal Science (Agricultural Biochemistry & Nutrition) with recommendation to proceed to PhD from the University of Ibadan – MSc research project on: Growth and protein digestibility by West African dwarf rams given salt-licks; and 2) BSc in Agriculture General (1st Class) from Njala University College, University of Sierra Leone – BSc research project on: The effect of added protein (fish meal) to a standard broiler ration on the performance of native chickens;  3) Certification as Certified ProfessionalFacilitator; Strategic Planner and various short courses in the domains of Gender, Management and many more. I have been involved in Livestock development work and research, training/teaching and students’ supervision, as well as consultancy; with extensive international work experience within and out of Africa. I am a co-author of a book titled: Farming Systems and Practices in Cameroon.

I served as Part-time Lecturer at the Regional College of Agriculture Bambili for two years, Worked with Heifer International for 13 years; as Project Coordinator in Heifer International Cameroon; Deputy Country Director for Heifer International Cameroon and Regional Program Offer for Southern Africa, respectively. During these years I was involved in leadership and management, developing training manuals and training of project staff and other stakeholders in livestock management including, chicken, goats, sheep, rabbits, pigs as well as organized and facilitated numerous workshops on gender, strategic planning, program reviews, theory of change etc. As Regional Program Officer for Heifer International Southern Africa,I provided livestock training and technical support to the 5 country programmes in the region for 4 years. During my service with Heifer International, I led the training of trainers and mentored hundreds of development practitioners and managers of smallholder livestock projects nationally and internationally in small holder agriculture and livestock Development Systems and travelled to 23 countries (16 in Africa and 7 out of Africa) while building capacities around livestock, economic development and gender.